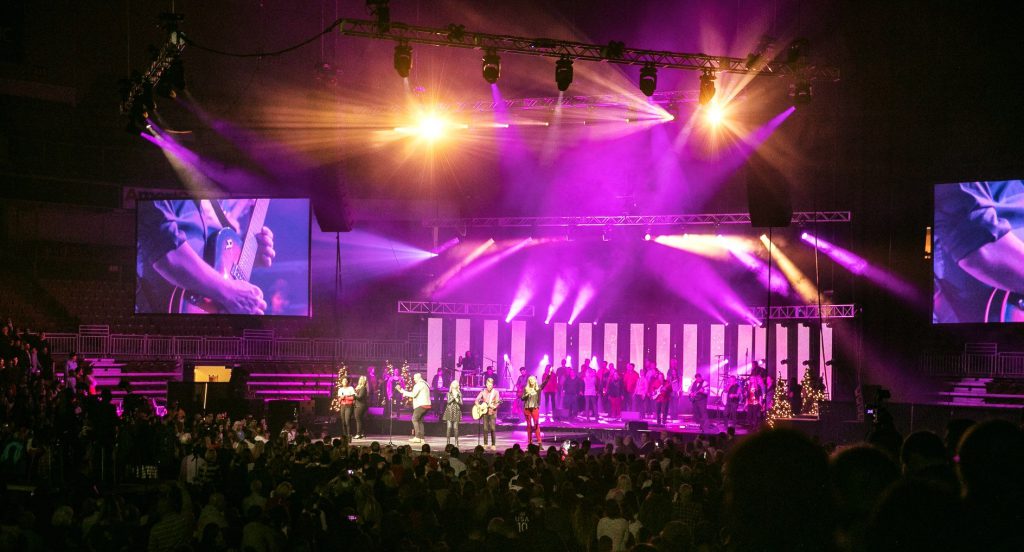 MANCHESTER, NH – Over 6,000 people attended Manchester Christian Church’s “Christmas at the Arena” celebration last year. It’s hard to imagine that even a single one of them left the spacious Southern New Hampshire University Arena feeling anything less than awestruck by the video and lighting display created by Events United.

Still, like an artist looking at a finished painting and noticing where a single brush stroke could have been added, Tim Messina and his team at the company left last year’s event (which featured a “snowflake design” with no traditional upstage wall) determined to find ways they could take their production to the next level for Christmas 2018.

On Thursday December 20, it became beautifully apparent that Events United succeeded in this mission, as it transformed the SNHU Arena with a seamlessly integrated and deeply immersive lighting and video design created with CHAUVET Professional Maverick, Rogue, ÉPIX and STRIKE fixtures, as well as PVP X6IP LED video panels.

“We are always pushing the envelope, looking for ways to raise the bar with our designs,” said Messina. “Last year’s show got great reviews. Everybody loved it. But looking at it, there were a few elements we wanted to enhance.”

Among the things Events United sought to accomplish with their enhanced design was to have the area directly behind the pastor filled with more dynamic visuals. “We wanted to create more interesting looks in the space behind the pastor for our tight IMAG shots,” said Jon Martell, lead designer and video specialist at Events United. “We felt this area could have been a little more compelling when we had closeups of the pastor and worship leaders.”

The Events United team also wanted to change the looks of the Christmas show by moving away from the giant video screen that dominated the event in previous years, and go with a design that wove lighting and video more closely together. To accomplish this, they broke up the large video wall from last Christmas into 16 vertical strips made of 80 PVP X6IP tiles.

This arrangement not only integrated all the visual elements of the show more tightly together, it also allowed Events United to create a more dynamic backdrop for closeup shots by positioning tiles in the area directly behind the downstage thrust. “The pixel pitch, high contrast, and vivid colors of the tiles looked great on IMAG,” said Messina. “Plus, the bright and punchy output was ideal for this arena setting; we were able to use the video wall like blinders at times when we needed big hits.”

Pipes holding two Rogue R1 Wash units and two ÉPIX Strip Tour linear fixtures were placed around the vertical video walls. These fixtures were divided into two angled side trusses and a center truss on the pipes to create dimensionality and depth.

“By arranging the lights this way, we allowed the lighting elements to shine with the video, not just alongside it,” explained Martell, noting that 34 Rogue and 34 ÉPIX units were included in the rig. “The Rogue R1 Wash was a perfect match for the walls, and played nicely with the pixel-mapped ÉPIX Strip Tours. Putting them into an array like this allowed Ryan Lane, our lighting designer, to really play with big sweeps and geometric patterns.”

Having coordinated video images displayed on the PVP X6IP tiles and ÉPIX Strip Tour fixtures strengthened the integrated cohesive look of the design and created an all-encompassing atmosphere throughout the event. Resolume Arena 6 was used to play out visuals on the video tiles and strips.

“Since the entire show was run by timecode, we turned to our ChamSys MagicQ MQ80 to fire cues in Resolume,” said Martell. “This was a great solution, as it allowed us to utilize the generative content in Resolume to its fullest extent, while locking the show down to timecode. The MQ80’s easy-to-use Fixture Creator made it quick and easy for us to connect the console and Resolume using Art-Net.”

For front lighting and specials, Events United flew 12 Maverick MK2 Spots across downstage truss roughly 30’ in the air. This fixture’s wide zoom angle and gobo features allowed the design team to create multiple looks on stage throughout the evening.

“All of our fixtures were tied into our new design concept,” said Messina. “We took the 2018 Christmas show to the next level and are looking to do the same in 2019. That’s what makes this fun.” 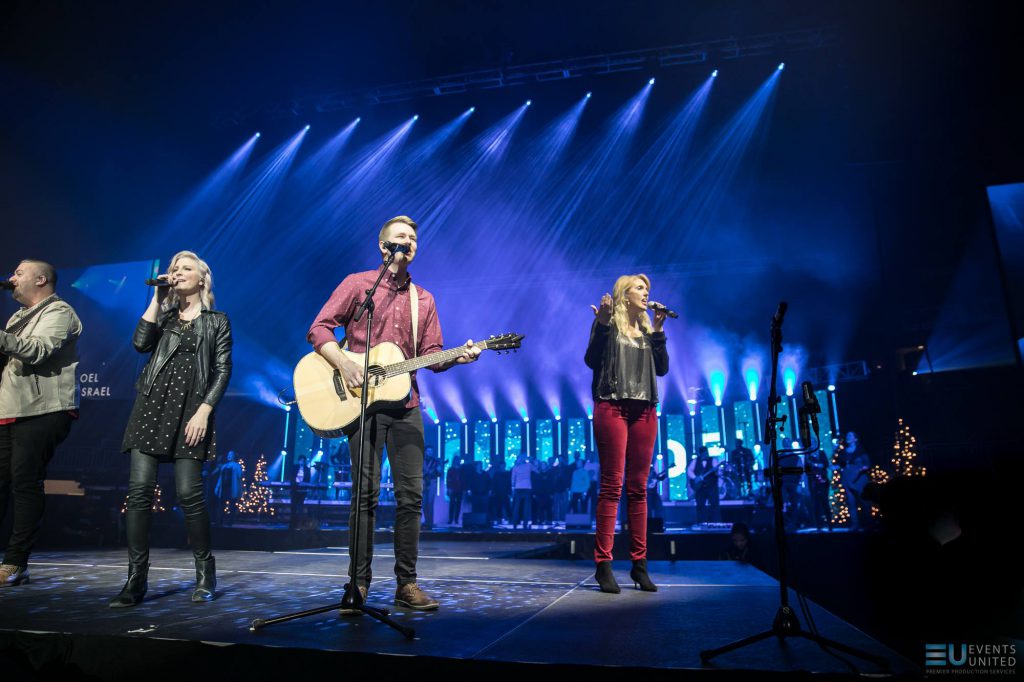