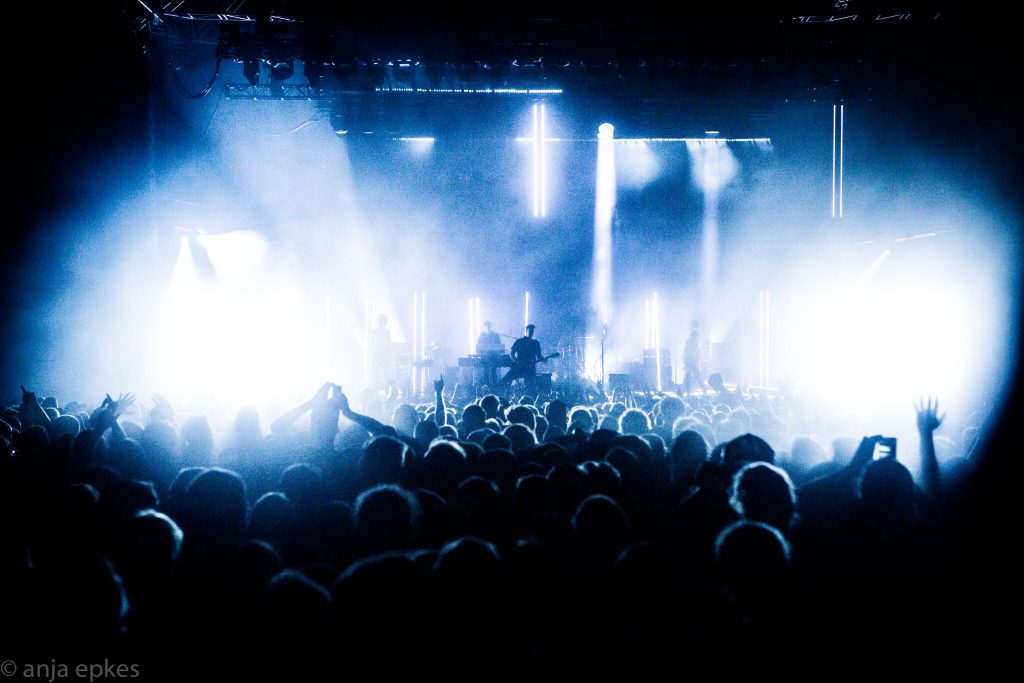 At the end of our discussions with lighting designers, we often ask them how they would like to be remembered. When we posed that question to this French-born designer, she deadpanned “as an uncompromising artistic LD,” before breaking out with a wink and a smile, to talk about being fun-loving and tasteful.

In truth, Pedron is all of the above. No one who was captivated by the infinitely deep and complex matrix of light she created for former client Jack White on his Lazaretto tour using only one color and a minimal number of fixtures could ever question her fiercely uncompromising artistic vision. At times, her designs seem to have been etched with the precision of a painting by Mondrian, one of the artists who inspires her creative process.

There is also a sparkling combination of playfulness and elegance that runs through all of Pedron’s work, both in style (she decorates her consoles with colorful artwork) and substance (she avoids cue lists and punts every show in its entirety). Viewing her console as an instrument, she has a flair for blending her light with music, for stars like Queens of the Stone Age, Ryan Adams, At The Drive In and Jimmy Eat World. Now based in Los Angles, Pedron spoke to us about weaving art and spontaneity into lighting design. 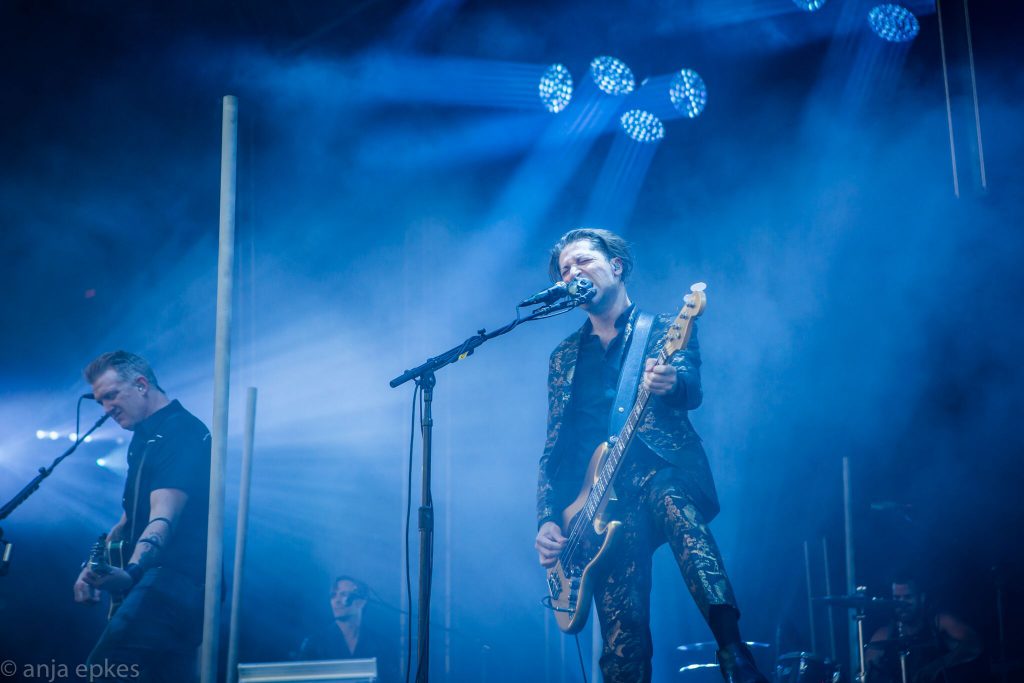 Like many people we were struck by your accomplishment in Jack White’s Lazaretto Tour, where you had no moving light chases, no sweeps, no video, yet you managed to create this engaging lightshow. Can you tell us a little about how you did it?
“I was only using the color blue too. Jack is really into live performances, analogue sound boards and old school lighting so that was the way I treated it, an old school par can light show that moved in black. It was an intensity light show instead of an effect light show. Jack isn’t doing a set list at all so it is mostly punting anyway. It’s a very difficult challenge but very fun to see come to life.”

We know you are not designing Jack White’s current tour, but your work on Lazaretto seems to be representative of much of your design philosophy. Is it fair to say that you prefer to keep designs simple with minimal fixtures?
“Absolutely. It is my way of designing and it is also the esthetic I like in general. I really try to keep the type of fixtures to the minimum.” 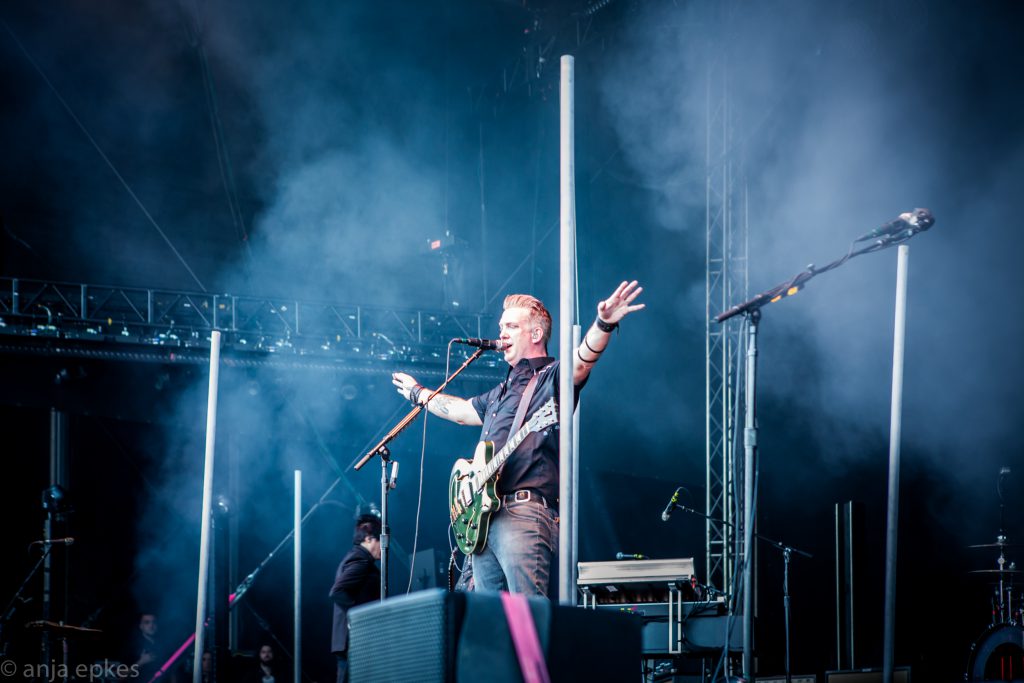 You are famous for your busking. Do you always busk your entire show?
“Yes, pretty much. I hate cue lists and always spread my song page over all the faders and buttons. I configure my console as a keyboard that I play at the same time as the band. I pretty much change the show everyday.”

Why do you like to busk?
“I love to busk because it puts me in sync with the band. The bands I work with are free to play anything they want and how they want it, I will always follow them. It gives an organic vibe to the show and a total creative freedom to the band. That is what I’m aiming for in my designs.”

If someone asked you to list the three things that make great busking, what would you say?
“First you need to know how music works.  Listening to a lot of different music type and understanding the type of music you are gonna do lights for is step one of busking.  Secondly you need a tool you know well. I mean a console that is configured with a solid busk page and that you have set up yourself. Finally, you need to be relaxed and focused behind the board. Busking is on
the moment, you can’t be distracted by anyone or anything during the show. That is why I wear a InEars monitors with only the PA mix in my ears during the show.” 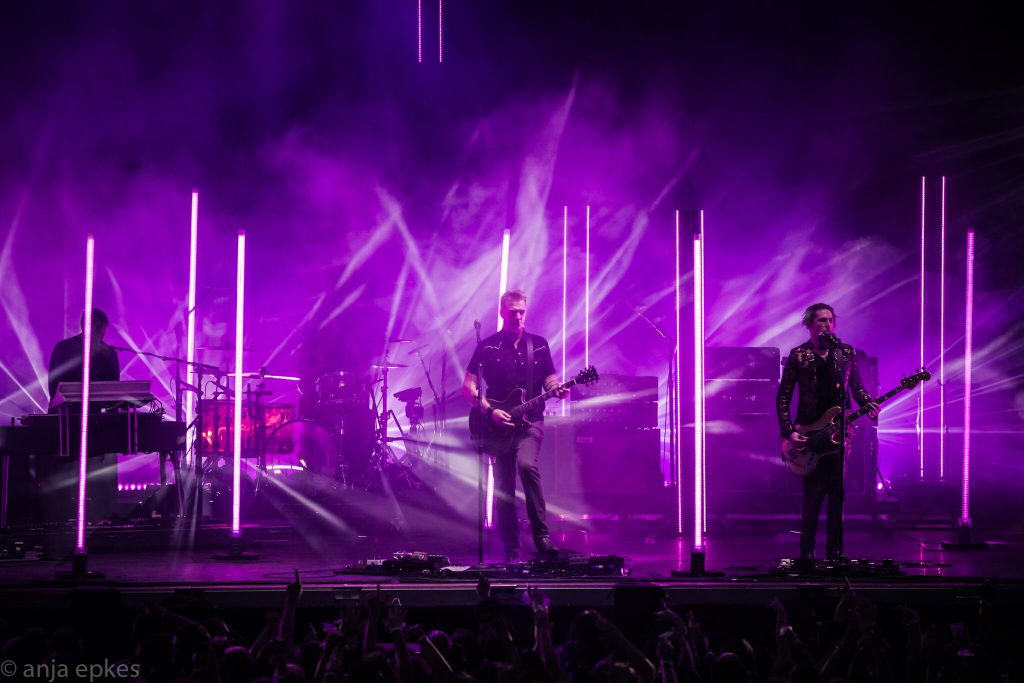 We think we know the answer to this – do you ever timecode?
“No. I don’t even know how to set that up. I reckon that some shows require it but it is not my thing.”

In the Queens of the Stone Age tour you started out with a concept developed by LeRoy Bennet and basically reinvented it. How did that work?
“They reached out to Roy before the tour looking for ideas. I was hired after the fact at the very beginning of the tour. Then the band gave me full control of the design so I did! We kept the idea of vertical LED because that is what the band wanted in the first place and I changed it all.”

You’re very in demand as a lighting director, running shows designed by others. How great is the influence of a lighting director or board operator in determining the look of the final show?  It’s been said that the same piece of classical music will sound very different depending on who the conductor of the orchestra is. Does the same principle apply to lighting directors?
“Absolutely. Ultimately the person behind the board is in control.  Again some shows require a strict execution cue by cue to respect the designer, some are just a lighting placement that the operator programs at will.  It really depends on the band you are gonna do lighting for and what designer you are working with.”

You’ve played all over the world, do you have a favorite city and favorite concert venue that you like to work at?
“So many! My hometown venue is of course gonna remain my favorite, it’s Le Chabada in Angers.  The Anthem and the 9:30 Club in DC are my favorites in the USA but there are amazing places all over the world.” 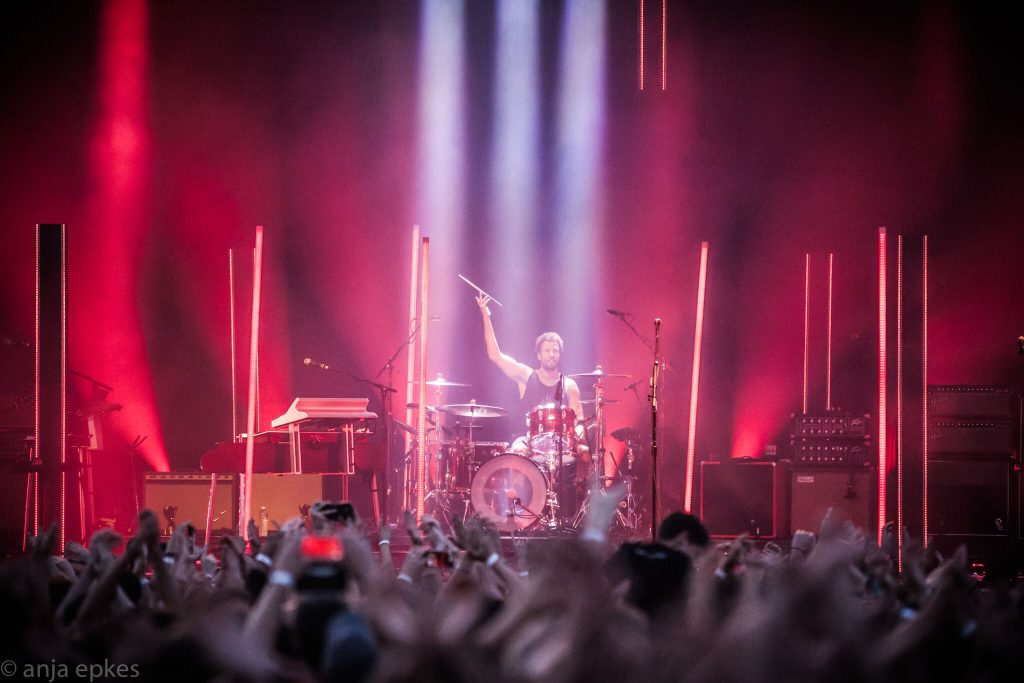 What’s the one project you did that you learned the most from?
“I will say all of them ha ha.   My first tour in America was with Jimmy Eat World. I barely spoke English and I ended up touring with my trailer of light by myself in a very foreign country for me at the time. I had learned a lot and fast at that time!”

Who were the big influencers in your career?
“I always went to shows since I was a kid. I knew I wanted to get involved in this type of thing. When I was a teenager I watched the live concert of La Mano Negra on VHS a million times and noticed the lights. I then saw a band from my hometown that was the same kind of music and they took me on tour.  They put me right into it so I guess they were the first influencers. The band is called La Ruda Salska.  I decided to bring my career to the international level when I met Dan Hadley. He was Queens of the Stone Age LD at the time. So you can say that the cycle is complete.”

How did you get started in lighting?
“I started without even knowing it. One day I wanted to become a lighting person and the next I was on a van touring France with La Ruda Salska doing lighting. I’ve learned without any proper training.”

What role do you see video panels playing in your designs? How do you think their growth has changed lighting design?
“Video is its own thing. It’s a different discipline. It requires different creatives. I always used video as a lighting source, a moving light. Some video shows I’ve seen were mind blowing like Nine Inch Nails’ Lights in the Sky or Beatles’ Love in Vegas because they were video projection, but mainly I don’t really care for LED screens.” 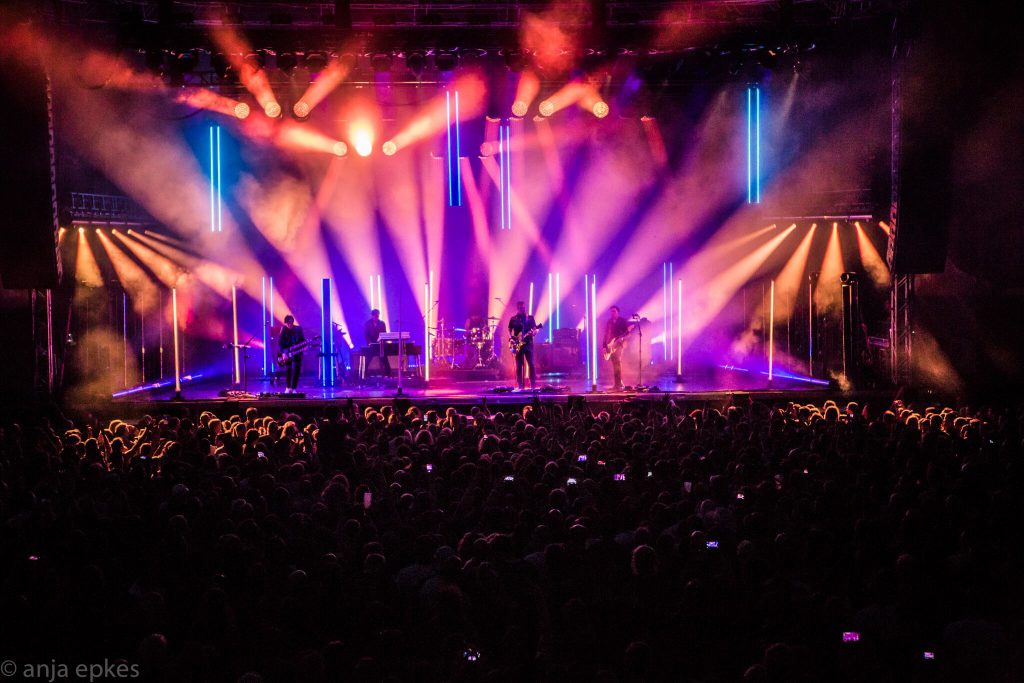 Do you have to like your client’s music to do a good job as a lighting designer or director?
“For me it is crucial. My art doesn’t work the same if I don’t love the project. I put my heart and soul into it and it is my biggest pride. Some LDs don’t see it that way — everybody is different!”

How do you get inspired?
“I recently discovered that I have Chromestesia. It is a little mix in your senses that makes you see things when you hear sounds. In my case music is associated with colors and shapes. It has been like this my entire life. I will say it’s a bonus in my job and the reason I probably was naturally drawn to it.  A big part of my inspiration is art. My favorite artists always have a cameo in my shows. Talking about James Turrell, Dan Flavin, Mark Rothko, Mondrian and so many others.” 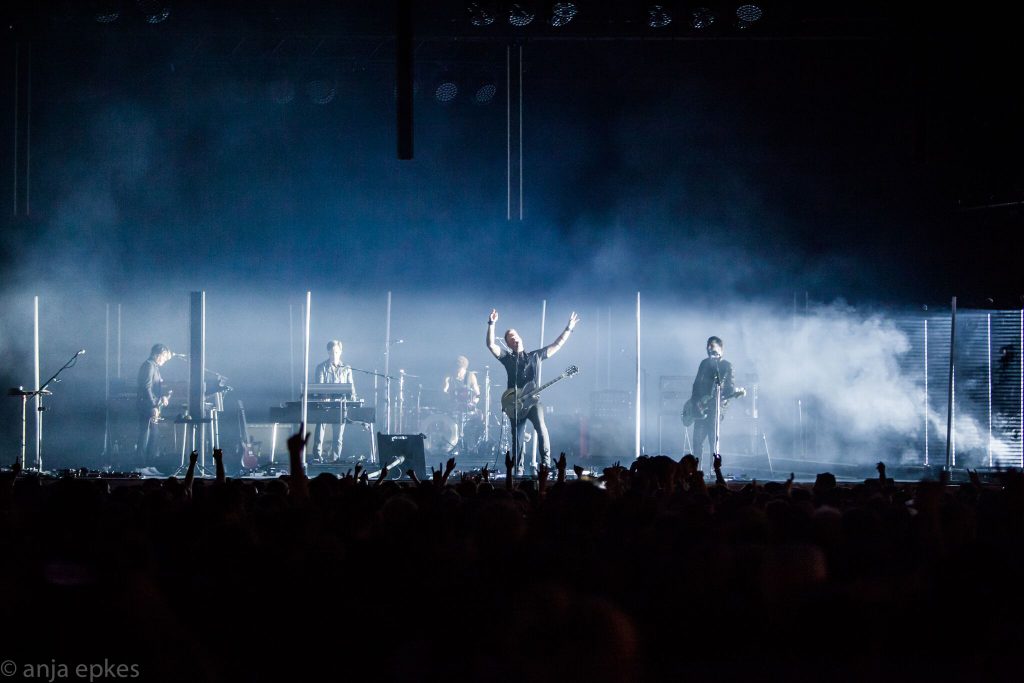 Do you have a favorite color to light in? Why is it your favorite?
“Blue is my favorite. I have worked for Jack White for seven years and it was the only color I was allowed to use.  In seven years, you have time to turn every shade of a color around ha ha! In the end, I mastered it, and it has remained my favorite. I recommend the reading of Blue, Story Of A Color by Michel Pastoureau for a deep cut on blue.  Lately I’ve been experiencing with greens and reds … De Sjil style forever!” 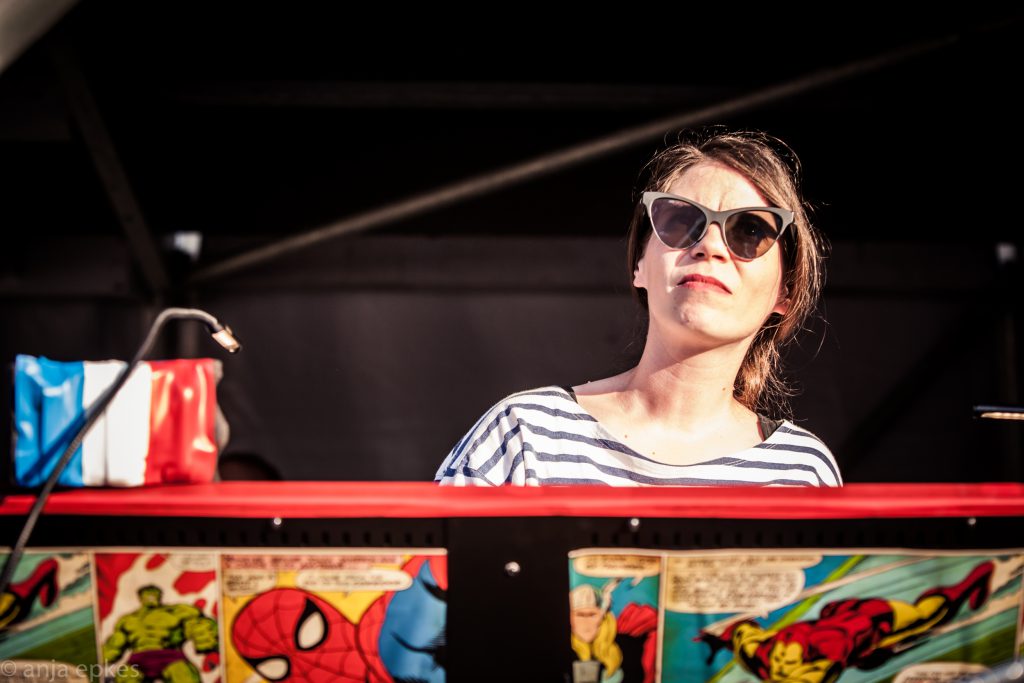