WICHELEN, BELGIUM – The drive-in movie, an 87-year old American cultural icon that had long ago been pushed to the edge of obscurity, experienced a well-documented global revival in 2020 as people sought safe, socially distant forms of entertainment in the face of the COVID-19 pandemic. This has been very evident throughout Europe, as drive-in theatres have popped up this year from the Baltic to the Mediterranean.

In East Flanders, the government of Wichelen took a somewhat different approach. Instead of creating a single drive-in movie site for people to visit, it brought the concept to its citizens. Under the leadership of mayor Kenneth Taylor, a Flemish TV and film director, it organized drive-in events at different locations throughout the community.

The Lokeren, Belgium based event company D-Dream set up the drive-in sites for the Wichelen municipal government. “We were directly contacted by the city,” said Elke Scheirs of D-Dream. “They told us they wanted to bring a new live event to entertain their citizens in a safe way during the Corona pandemic. Since the shows were to be held at different locations, we wanted a system that was easy to transport and set up.”

D-Dream built this drive-in system around an 8 x 4-meter LED video wall made up of 64 CHAUVET Professional F4IP panels. “Of course, since the shows were outdoors, the IP rating of the panels was essential,” said Scheirs. “We had rain during one of the shows, and temperatures were extremely high this summer. At one of the events it was up to 35ﹾ (95ﹾ Fahrenheit). Nevertheless, the F4IP panels continued to work perfectly.”

Images on the video wall were easy to see when the drive-in shows started, even though it was still daylight, thanks to the F4IP panels’ bright (5,500 NITS) output. The 4.8mm pixel pitch and 3,840 Hz refresh of the panels were also critically important, since they made it possible to deliver crisp flicker-free images at distances as short as four meters.

The Wichelen drive-in shows were held in a variety of locations, from farms and fields, to town squares. Regardless of where they took place, all shows followed strict safety protocols. Facemasks and hand sanitizing were required, seats for those not in cars were placed 1.5 meters apart and all tickets had to be purchased in advance with attendance limited to 200 people.

At some sites, people got into the retro spirit of the drive-in by showing up in vintage American automobiles painted in stark 1950s style colors. But of course, the Wichelen shows did not take place in the USA, but 5,982 kilometers from the drive-in’s New Jersey birth place in a small East Flanders community. Still, the feeling of being outside enjoying a movie on a summer’s night was as magical as ever – and during this time of a pandemic, that was an experience to savor. 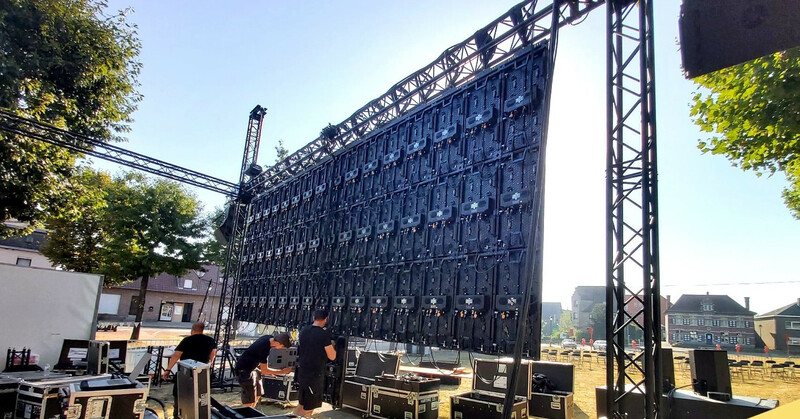