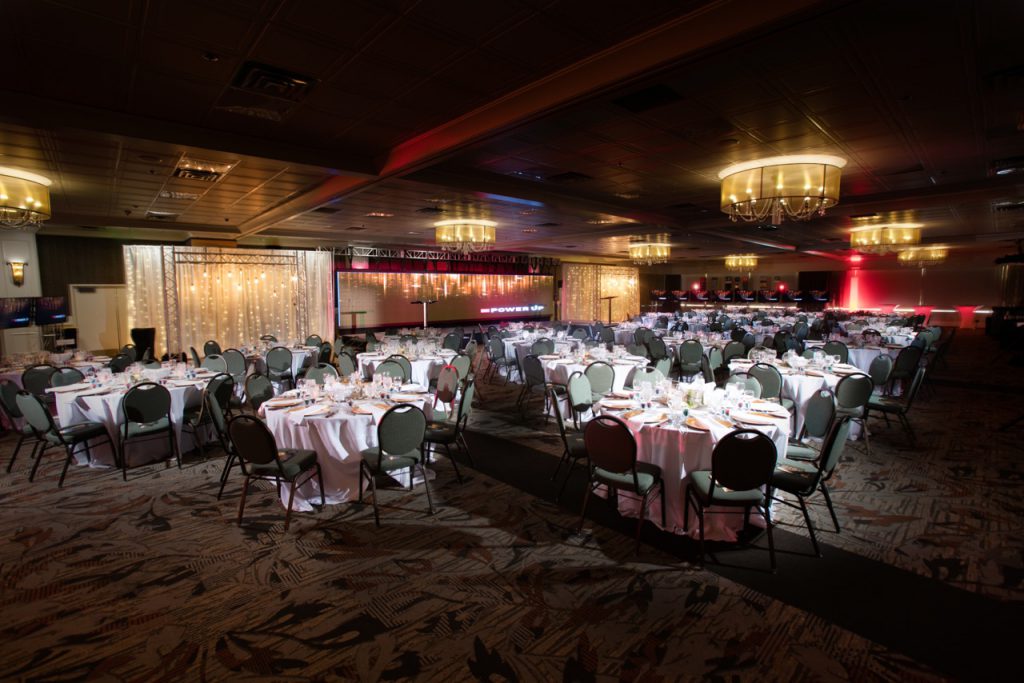 SPOKANE, WA – Although it has locations across the US, the Red Lion Hotel chain isn’t ranked among the giants of the hospitality industry. The Spokane-based chain is, however, second to none when it comes to customer service. This much is evident from the many accolades the chain has won, including multiple Number 1 ratings for customer satisfaction in the prestigious Metrix Hospitality Index.

Since good service depends on motivated employees, Red Lion is also focused on recognizing its team members. This year, the chain’s employee appreciation efforts were given a big boost by a giant video wall created by AMP’D Entertainment using PVP X6IP tiles from CHAUVET Professional.

Justin Haas of AMP’D used the 6.9m pixel pitch panels to build a 35’ long and 7.5’ high wall behind the stage at Red Lion’s President’s Award Ceremony, an annual event recognizing team members for their achievements. Hanging the long video wall on a 38′ span, with four lift stands to optimize height, Haas used it to display motivational and informational content created by the client.

“The span of the video wall really grabbed everyone’s attention,” he said. “The resolution and the 130° viewing angle helped ensure that everyone in the room got a good view of the content. Beyond that, however, I think the size of the wall really made the event feel more special. It just created a very big impression.”

Since some of AMP’D Entertainment’s stock of PVP X6IP tiles was out on another project at the time of the Red Lion event, Haas rented additional units from Pyramid Staging in Seattle. “The wall involved a lot of tiles for us, but the effect we got from the massive wall was well worth it,” he said. “A thing that strikes you about these tiles is their brightness. They really light up a room when you want them to. In fact we put the dimmer value to 1 out of 16 in this job.”

Haas detailed how he fed content to the broad screen while maintaining a cohesive look. “We were able to split the screen into three sections, as well as span one image across the screen, using Roland’s new XS-83H Matrix Switcher,” he said. “We used the split three screens for PowerPoint presentations and the span of the screen for videos. We also used Roland HDbaseT RX on the other end to feed the Chauvet VIP Drivers. Each section was seven panels wide by four panels tall. The connection between the panels was pretty seamless because of the way they’re engineered, so we were able to create a smooth look. The 200 centimeter and 50 centimeter rig bars we used in the installation work perfectly.”

Although the end result was seamless, the installation process for Haas and his AMP’D Entertainment team was not without its challenges. “Load in was a little difficult at times,” said Haas. “The client already had the stage in place and asked us not to move it, which caused some issues with height. The client would have liked the wall higher, but obviously that couldn’t happen, as it was physically impossible. However, the client was actually very pleased with the wall when we finished and draped it off. We got a lot of compliments on the wall. In the end it made the event seem that much more special.”