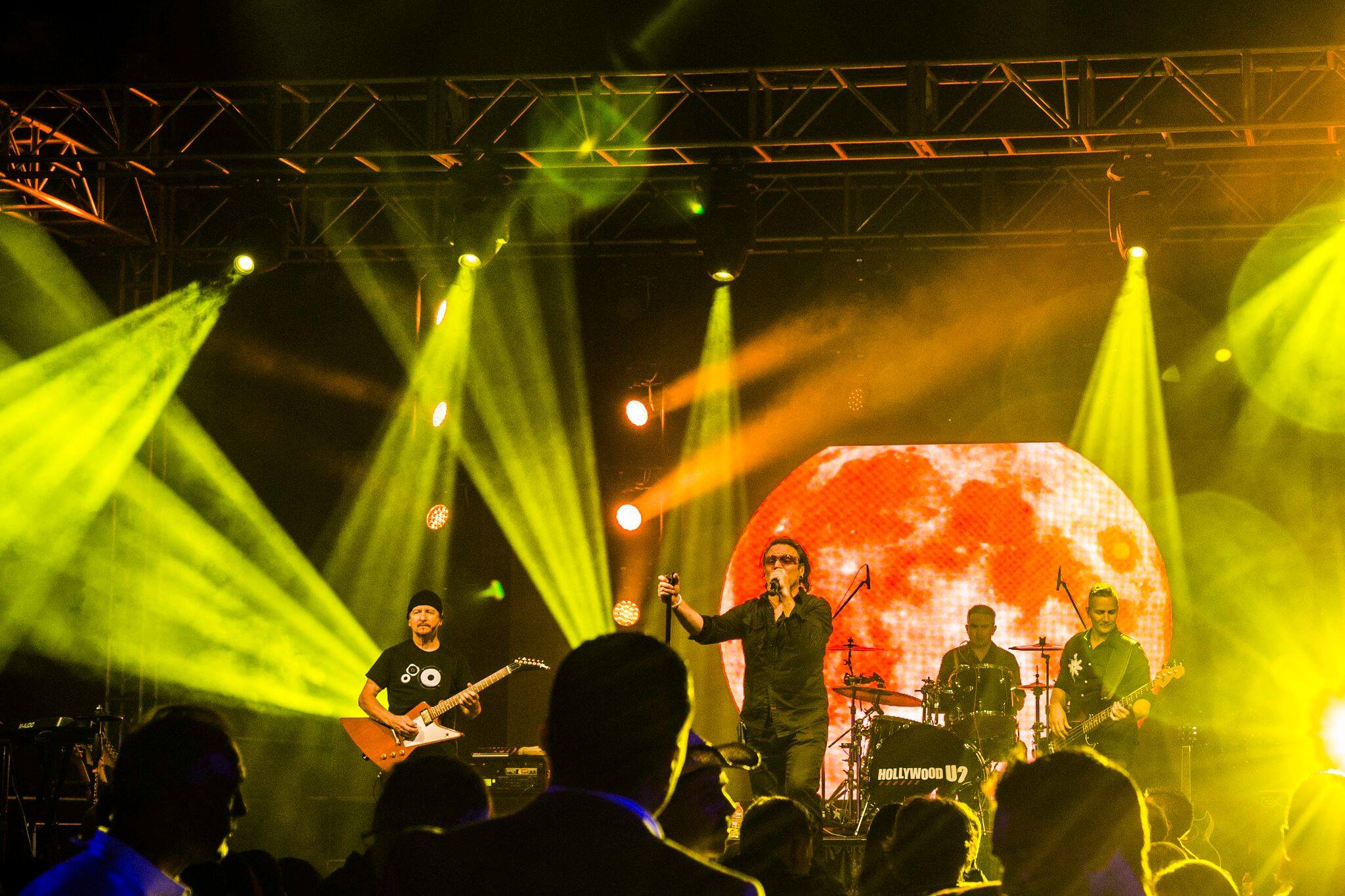 PHOENIX, AZ – Really good tribute bands are often praised for capturing the spirit and sound of the original artists, but rarely does this compliment come from the actual stars themselves. That’s what makes Hollywood U2 so special. A couple of years ago, its frontman Joe Hier was at a U2 concert at the LA Forum, when Bono paused midway through the band’s second set and exclaimed, “I see myself in the crowd!” With that the famed U2 frontman summoned Hier onto the stage, where they proceeded to perform “Sweet Things” together. “You’ve got a great voice,” Bono told his double after they completed their duet.

The genuine sound and charismatic stage presence that earned this praise from Bono was on full display this October, when Hollywood U2 performed at an event in Arizona. Supporting the popular tribute band was an appropriately bold and colorful lightshow designed by John Garberson that featured a collection of CHAUVET Professional Maverick, Rogue and STRIKE fixtures, supplied by Creative BackStage.

“I was asked to design a stage with lighting and video for a U2 tribute act that kept all of the elements of an actual U2 show,” said Garberson. “The arena-level output, colors and fast movements we got from the Mavericks had a big part in helping us achieve this goal.”

Garberson’s rig included 10 Maverick MK2 Spot fixtures, which were flown on mid-stage truss. The 440W LED units were used to evoke images of a U2 arena show by sweeping the crowd and stage with intense colorful beams. The fixture also accented key moments in the show by downlighting different performers with multi-colored specials.

Taking advantage of the Maverick’s wide zoom range, Garberson engaged the crowd by radically changing beam sizes at different points in the show. He also used the fixture’s two rotating gobo wheels to cover the stage and crowd in a variety of patterns, while relying on the variable CMY+CTO color mixing system to blend the lighting with the large video wall in the middle of the stage.

“This show was outside, so we used a 4-post motorized roof to fly the lighting and sound,” said Garberson. “We did a bi-level stage: our main stage was at 4’, and we had a 65-panel 6mm LED screen positioned at 6’. We ground stacked our LED screen on the higher deck, because it was safer to do it that way as opposed to flying the system. It really helped having the LED screen being up higher than the main stage. The output of our Mavericks and other fixtures matched the screen to create a big impression on a relatively small event stage.”

The Creative BackStage team, which included Chris Brodman, Jonathan Brekken, Matthew Berg, James Simpson and Jamie Rivera, in addition to Garberson, engaged the crowd at the one-off event with arena-style audience lighting, courtesy of the five STRIKE 4 multi-format warm white LED units that were flown downstage on their rig.

Adding to the arena stage looks were the rig’s 28 Rogue R2 Wash fixtures. Garberson and his team flew eight of these units on downstage truss and used them to wash the stage apron and for audience lighting. The remaining Rogue fixtures were arranged vertically on backstage ladder truss to provide a constantly changing color backdrop.

“We relied on color washing to reflect different moods,” said Garberson. “We tended to go with bold color washes like reds for our washes, because of their intensity. This band conveys a lot of the excitement of a U2 concert, and we wanted our lighting to do that too.” 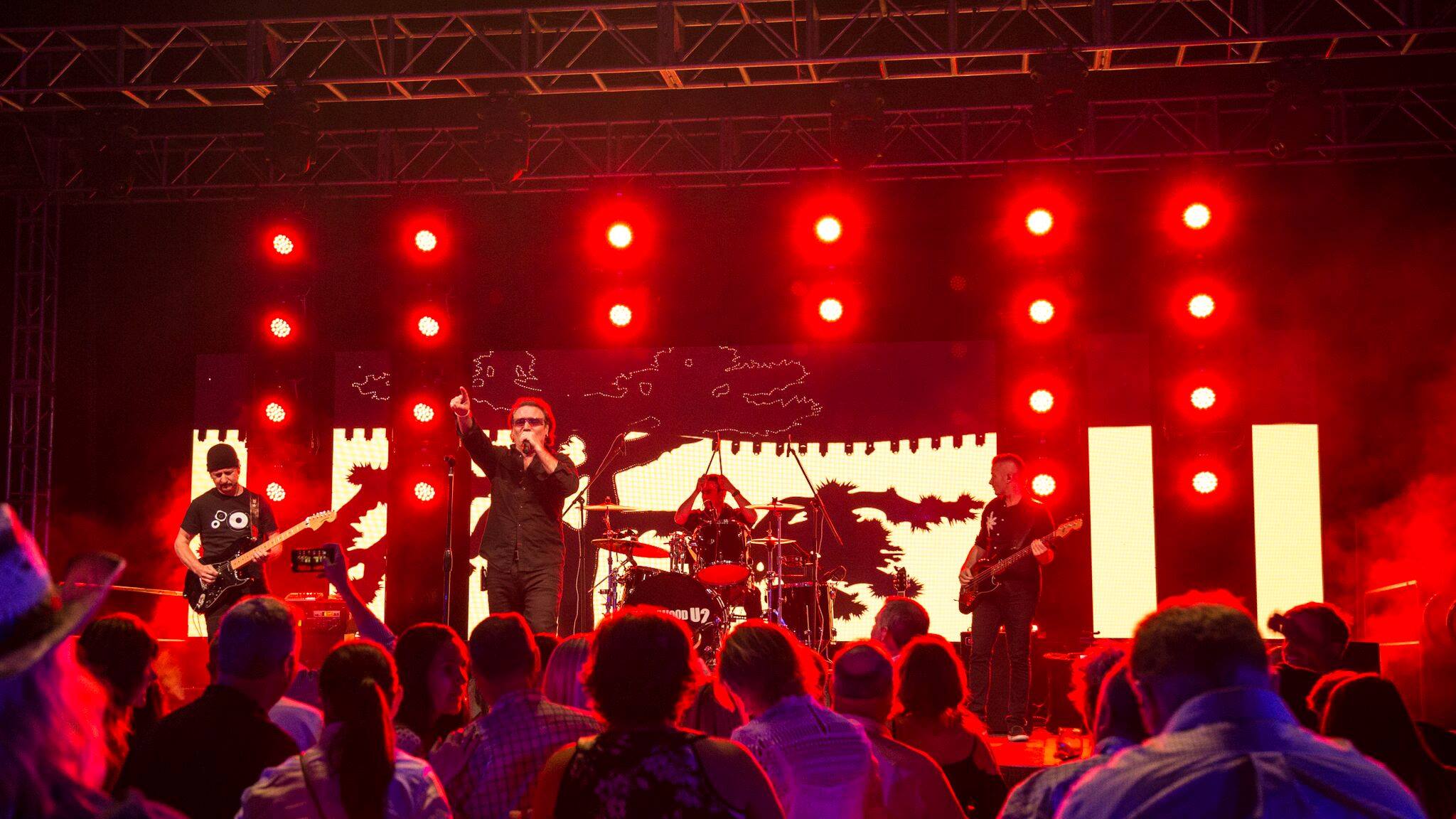