COLUMBUS, OH – “When it comes down to it, nothing trumps execution,” wrote Gary Vaynerchuk, the best-selling author and venture capitalist. Vaynerchuk didn’t pen these words to describe the SkySprout Summit, where he recently delivered the keynote speech, but they do provide an apt description of what event organizer Nick Francis and lighting designer Brent Schmidt accomplished.

The two men spent more than six months going over every aspect of the digital marketing conference to ensure that its visual presentation reflected positively on its message. For Schmidt, the owner of Cleveland-based B Productions LLC, lighting the conference involved achieving a delicate balance between creating the kind of colorful, dynamic looks consistent with its hip, young digital theme, while also maintaining the right key lighting for speakers.

Careful planning and execution helped Schmidt and his team meet this challenge. So too did the collection of CHAUVET Professional fixtures that he used to light the event, which was held at the 15,800 square foot Columbus Grand Hyatt ballroom. 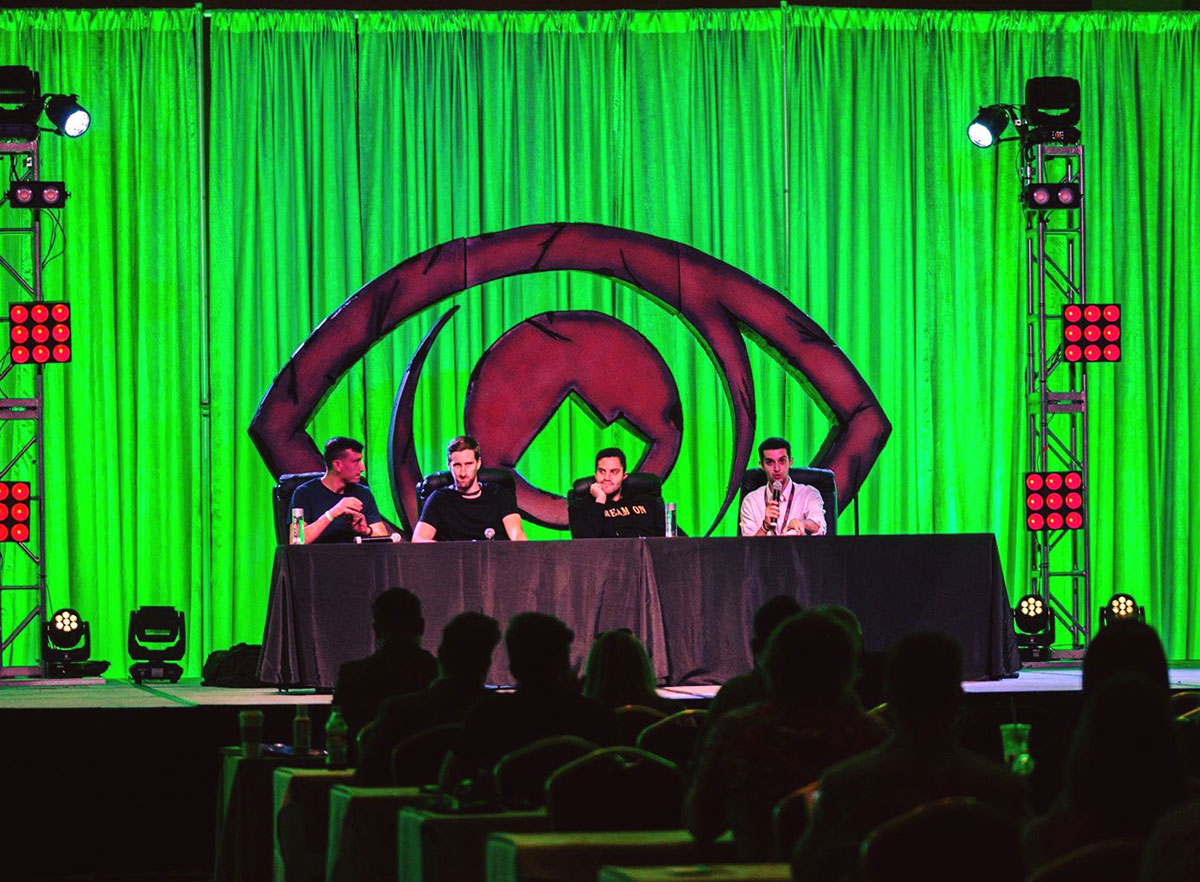 “What much of this came down to was attention to detail,” said Schmidt. “When designing a conference that has heavy content and spoken words, the stage cannot be overbearing with color and light, but at the same time it needs to have enough light for both cameras and for the live audience. By utilizing LED Ovation ellipsoidals and simple color choices for the drape lighting, we were able to have the presenters stand out, while still creating interesting looks on stage.”

Relying on the four Rogue R1 Spot, four Rogue R1 Wash, and 20 Rogue R2 Wash fixtures in his rig, along with the 12 Ovation ED-190WW ellipsoidal units, Schmidt blended focused front lighting with colored backlighting to create a balanced look. “We wanted the speakers to stand out, and not be swallowed up by the stage,” he said. “At the same time we wanted the overall environment around them to look exciting. We did this by paying careful attention to the focus of our key lighting and by using subtle colors for the area behind the speakers.”

Schmidt used solid color palettes, often varieties of reds, blues and purples, to back the speakers. “We setup pre-programed palettes, colors and different movements that we could call on when a speaker was coming up, or coming off, the stage,” said Schmidt. “For each speaker we used different looks. The MC had the same look each time he came on the stage to provide a level of consistency.” 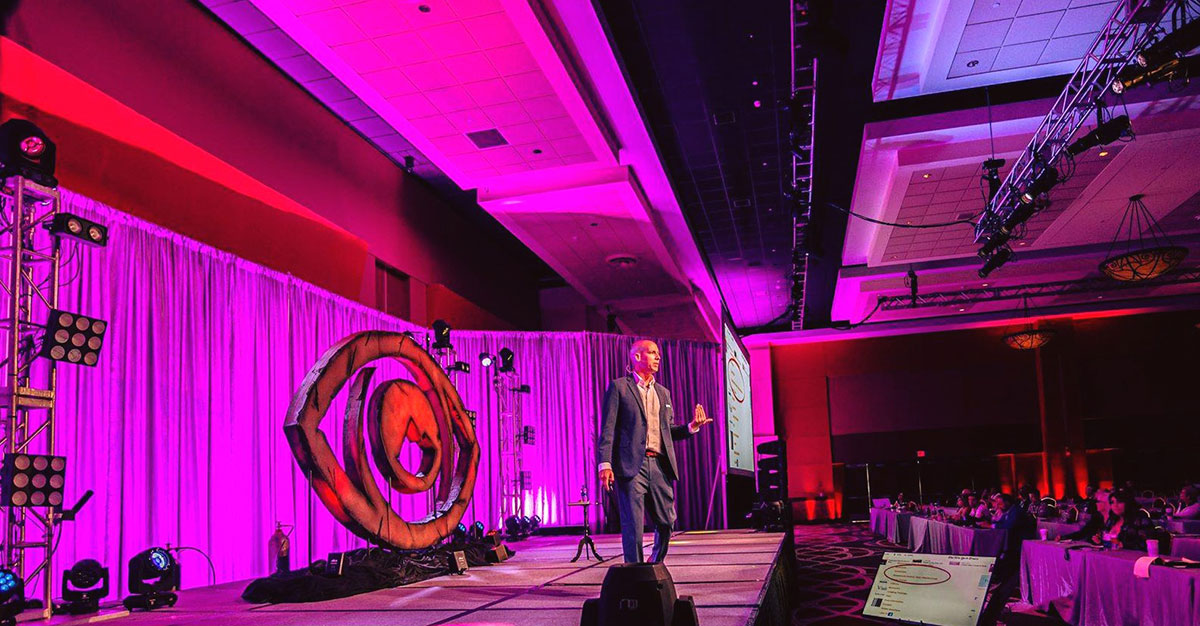 During those periods between the speakers Schmidt dressed up the stage with bolder colors, compelling movements, and gobo patterns. Helping him accomplish this was a collection of Maverick fixtures.

“We relied on the Mavericks to fill a number of different roles during the conference,” said Schmidt who had eight Maverick MK1 Pyxis, four Maverick MK1 Hybrid and two Maverick MK2 Profile fixtures in his rig. “The hybrids and profiles were used as texture lighting coming from the flown truss rig in the audience. They allowed me to cast gobos and movement throughout the space, which created memorable looks.

“Our Pyxis fixtures were mounted on truss columns and positioned on the stage deck,” continued Schmidt. “We used them to create some interesting eye candy looks between the speakers and at the start of the conference. Of course, when we had our VIP party we relied heavily on all of the Mavericks to generate some exciting visuals.”

The Maverick MK2 Profile fixtures also did double duty as front light fixtures. “Our rigging points weren’t ideal,” said Schmidt. “Because of how the rigging points fell, we either needed to have more ellipsoidals with 26-degree lenses, or fewer with the 36-degree lenses. We overcame this challenge by utilizing our profile fixtures that came from the FOH truss as front lights.” 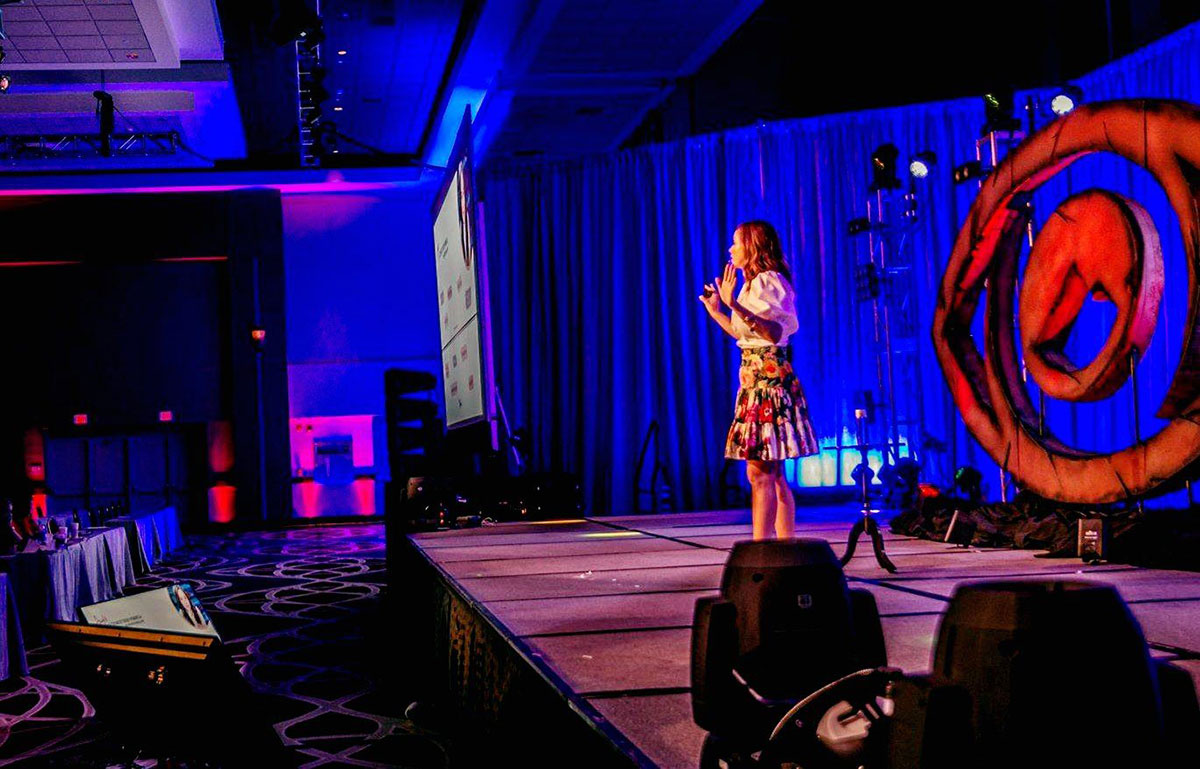 Load in presented another challenge for Schmidt and his team, as they had to dismantle their truss carts to navigate the tight turns around the dock. He credits his production crew Renee Murry, Shawn Delaney, Joe Plovock and Tommy Carosielli with meeting this and every other challenge involved in the project.

“I can’t praise our team enough,” said Schmidt. “It wasn’t just our great production crew, but also our designer, CJ Mellides who put together our Vectorworks floor plans and power draw sheet. Not many people think about it, but when it comes to setting up a show in less than 24 hours, having those documents is absolutely critical.”

Included in those documents was positioning for a large number of CHAUVET DJ fixtures, including the Freedom Hex-4 Par and Freedom H1 units, which were used to uplight reception and registration areas as well as the ballroom walls.

Together, all the fixtures in the rig presented a powerful and immersive image. This wasn’t lost on Schmidt, who took a moment before the conference started to take in the panorama that he and his team had created. “I had been up for 42 hours and stopped to gaze around the room,” he said. “For me, it was amazing how our team had pulled together so many little details to create something so impressive.”