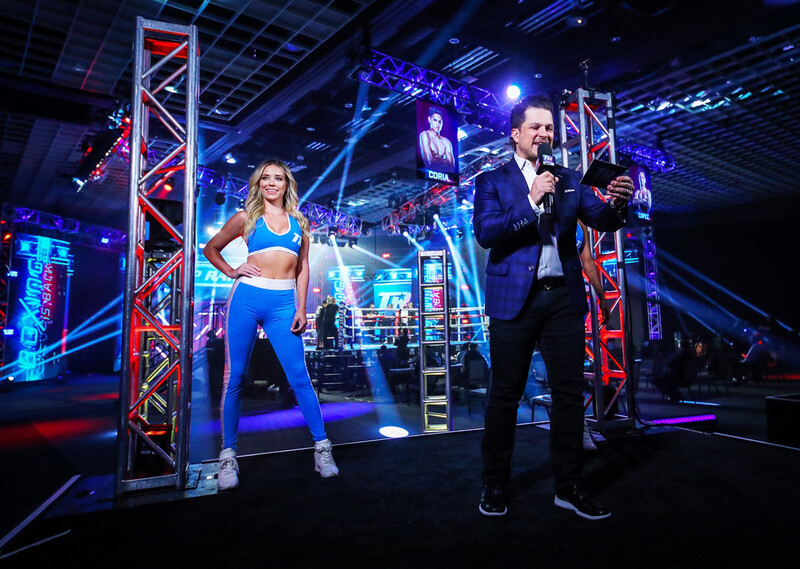 Crossfade Design was looking for a good audience wash last year when the firm redesigned the lighting for Top Rank Boxing’s highly rated ESPN series. Shots of the crowd in the background, dressed in their finery, their faces animated with excitement, was important to setting the stage for the action in the ring.

Finding a camera-friendly fixture that could accent the crowd in realistic even fields of light, while fitting in the show’s budget of a single 53-foot truck was critical. So, Michael Nevitt, the lead designer, was happy that the firm came across the Rogue R2 Wash.

Impressed with our RGBW fixture, Crossfade Design ordered 28 of them. Things worked out well for a while, with the Rogue R2 Wash accentuating audience shots in a way that made them pop out even more dramatically on the TV screen. 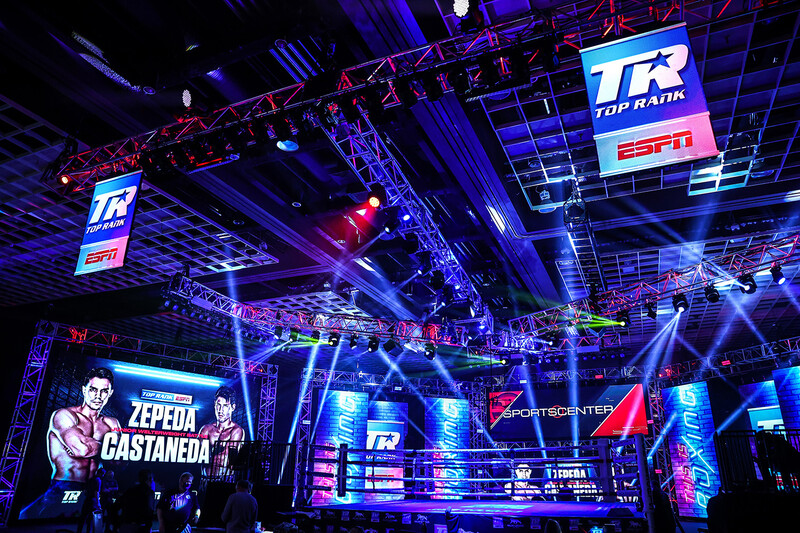 Then, COVID-19 hit. Top Rank Boxing matches were temporarily halted. When the televised fights returned, they were held in a “bubble,” an isolated section of the MGM Grand, following strict social distancing guidelines that limited crew sizes and prohibited audiences.

With no audience to light, Nevitt and the team had to find a new use for the audience lights. They did this to great effect, mounting the fixtures on the bottoms of four T trusses and using them for ambience setting color washes on the mat of the ring, resulting in a more interesting vista for the TV screen at the start of rounds. They also called upon the wash fixtures’ build-in LED macros to create added camera effects.

Repurposing the fixtures was only a part of the design challenge that Nevitt and the team faced when Top Rank Boxing was moved inside the bubble. To keep the image on the TV screen looking complete, they had to find a substitute for the crowd shots that had served as his background. 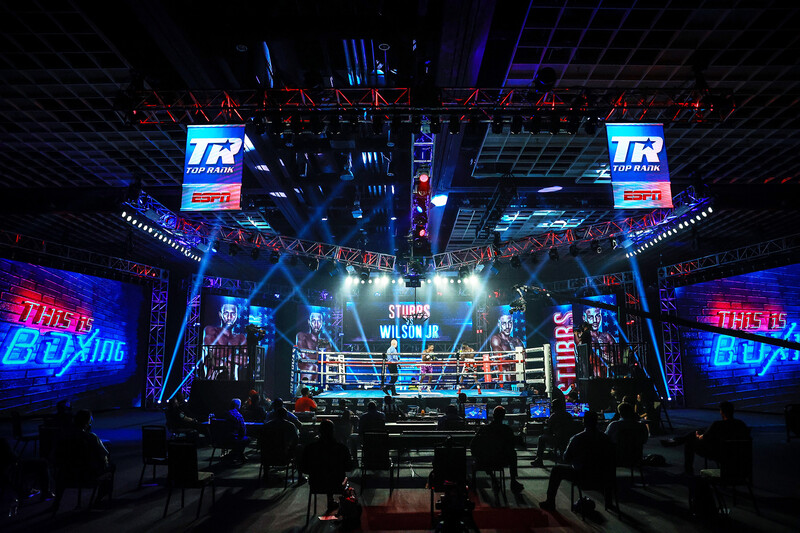 “Once Covid-19 hit, it became obvious that we would not be able to do our normal series of fights in arenas and other venue, due to issues with travel and the lack of fans,” said Nevitt, who has been lighting Top Rank events since 2011. “Top rank needed a venue that could be controlled, which is what we have no with our bubble, as its very isolated with access strictly prohibited to outsiders.

“Given there would be no fans, we wanted to approach the show more like a studio set than a sports event with crowds of fans in the background,” continued Nevitt. “I’ve done a lot of talk shows and game shows and it’s kind of the same thing. We use lighting, along with LED screens, much more for the camera. During the broadcast, the camera doesn’t have fans to sweep across for bump-ins, so we try and give the cameras – or should I say, mostly the Jib camera- something creative to shoot, including the R2 washes doing cool effects.”

Lending even more color during these periods have been the 22 Rogue R1 Wash fixtures that Crossfade Design purchased the same time the firm acquired the R2 units.
The challenge of reinventing the design process was compounded by the restrictions that social distancing mandates placed on crew size and activities. Nevitt credits the determined effort and unfailing spirit of cooperation of his team with helping make the shows a success.

“We have a great group of people involved in this project,” he said. “Sam Brown is my right-hand and worked as Lighting Director in addition to programming the media servers. Kota Earnhardt managed all the media coming in on a non-stop basis. Brandon Wade handled the programming. Eric Wade, Mark Pranzini and Adam Portelli split time as Lighting Directors and/or programmers on the normal series. Although they haven’t worked on the Summer Series, they are big part of this whole production.
“The rest of our crew is also outstanding,” continued Nevitt. “Daniel Baxter, Justin Kemmerer, Caleb Rumgay, and Connor Nevitt. Karl Navel LED Tech from Screenworks helped us whenever we need supplemental screens. Top Rank’s CEO Brad Jacobs, PM Ken Rumgay, Anthony Petosa, Jeff Dekel, and Dennis Layton have been great a team to work with on the Top Rank over the past 10 years.”

Working with Top Rank’s graphics team, Nevitt is gratified that together they’ve came up with “a functional and creative solution” to continuing the high quality of Top Rank’s broadcasts during the pandemic. Their collective effort shows that at times like these, the ability to pivot and meet new challenges is critical to success, whether you’re a design team, or an “audience fixture” that continues to contribute even though it no longer has an audience to light.