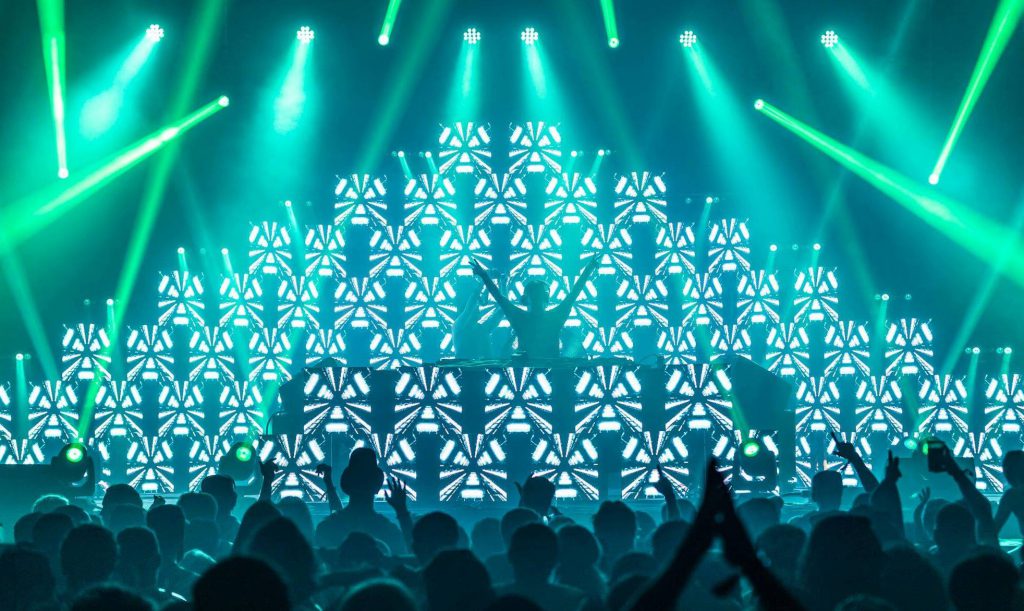 CHILLICOTHE, IL – Action in the Vibe Tent started in the early afternoon and went on nonstop to 4 AM the next morning every day during the Summer Camp Music Festival. Few fans left the spacious area for any length of time during these EDM marathons, captivated as they were by the music of artists like Zomby, MIJA and Dirt Monkey. Equally compelling, and just as sticky, was the eye-grabbing video and lightshow created by Antic Studios, using 75 PVP S5 LED panels from CHAUVET Professional.

Arranged in a 7-row-high pyramid configuration that appeared to envelop the DJ booth, the massive video wall transfixed fans with varied displays of unique and compelling images. These images moved from panel to panel over the face of the pyramid, enlivening it with a dynamic energy that reflected the spirit of the music, while drawing attention to the stage.

“We configured our S5 panels with a Chauvet VIP Driver and Signal Distributor,” said Antic Studio’s Max Koehler, who along with partner Ryan Warffuel designed the riveting video and lightshow. “Once we configured the wall, we used Resolume Arena 6 to offset each panel’s 64 pixels in order to achieve a seamless video display.”

Most of the content displayed on the pyramid wall was custom designed by Antic Studios. “We used Adobe After Effects,” said Koehler. “Knowing that each row of PVP S5 panels was offset by 64 pixels made it easy for us to let our creativity run wild.”

There seemed to be no end to what that creative rampage produced. Antic Studios didn’t merely repeat looks on the 75 panels that made up their wall, they often made subtle pattern changes from panel to panel that lent a sense of depth to the pyramid. At times, for example, they had the same diagonal lines on every panel, but made these lines thinner with each successive row, which made their pyramid seem even higher. The sharp resolution of the 5.2mm panels helped these subtle changes show up clearly to the audience, even at close viewing distances.

The designers also blacked out sections of different panels, or whole rows in the pyramid, to create a jarring sense of disruption. At some points, they even blacked out the entire pyramid, and used the PVP S5 panels to create chase sequences or display intersecting lines that evoked architectural and warehouse-looking imagery.

The DJ booth itself was positioned front and center before the pyramid. Covered with PVP S5 panels, it appeared to be part of the wall, absorbed into it as a result of displaying the same pattern themes that ran through the rest of the pyramid.

Accenting the pyramid and the DJ booth was an intense lighting display that had moving fixtures positioned on the downstage center deck and flown from upstage truss. “We coordinated lighting with the wall and had a lot of uplighting and aerial effects,” said Warffuel.

Included in this fixture mix, which was supplied by Indianapolis-based Herm Productions, were 12 Rogue R1 Beam units. “We placed three of the Rogues on stage left wings and three on stage right,” said Warffuel. “The output from these fixtures gave the stage an extra wide feel. We placed the remaining Rogues behind the DJ stand, right before the video wall.”

When beams from the Rogue fixtures behind the DJ stand were shot in the air, it pulled lighting and video together even closer, according to Warffuel and Kohler. This created a complete visual panorama that captivated people hour… after hour… after hour, all festival long.